+397497
Talking Tom Gold Run - the game is a continuation of the famous game in which you had to mess with your cat pet. But at the same time, it is not a simulator in itself, rather it is a runner. Rather, it will be so at first, as you progress through you will get access to other characters in this wonderful game series. The hero will have to chase a thief who stole gold from the characters of the game. Along the way, he loses gold, which is scattered from his bag, your goal is to collect it, as well as catch up with the thief.

You will see quite an interesting story here, which will be shown as a guide at the beginning of the game, here our hero sees a thief robbing his house and the house of his friends. It is reasonable to ignore such a thing, he simply can not, so he starts in pursuit of the thief, trying to stop the latter. At first, you will have to play for Tom himself, but as you move forward, you will get a chance to play for other characters. Moreover, we must honestly admit that the gameplay will not change much from the change of characters, even if the characters look completely different, but they move almost the same way. It should also be noted that you will not be able to catch up with the thief, but as you move forward, you will be able to collect much more gold than you originally had.

In terms of features, everything is frankly good, the game is cheerful and interesting, and pleases with its external design and user-friendly controls, the characters turned out to be similar to their counterparts from the game, which you will agree, gives them only additional appeal. As you progress, you can not only collect the gold dropped by the attacker, but also find all sorts of caches, which are also very much here and for their sake Talking Tom Gold Run is worth it. In the caches, it is not difficult to guess will be hidden gold, which will make your character even richer.

The game has a huge variety of bonuses that will diversify your passage, and make it more interesting, they can, for example, at the time to speed up the running of your character to make it faster and faster, allowing you to catch up with the thief faster. Also pleases a large set of locations, each time you will find yourself in a new and interesting place there is a city and a dungeon and just a wild surrounding area. Locations will change on a regular basis, so that one area will not have time, you get bored. And when you get tired of one thing, you will always find yourself in new locations that can please you with something new, so you can certainly play for a very long time. 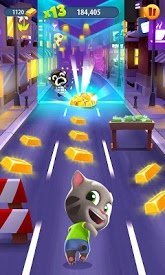 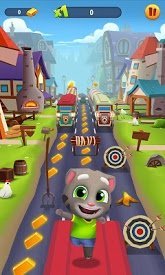 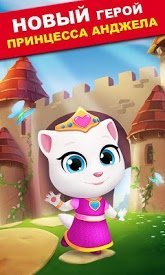 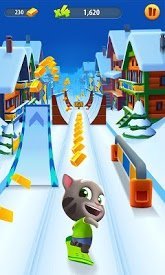