+78100
Welcome to the magic Kingdom, where magic reigns and various miracles happen. Your children will be very interested in participating in a fantastic game based on the animated film of the same name. Try your hand at solving magic puzzles, because only a real wizard can complete such a large number of stages. In any such puzzle, shiny crystals made of ice are used. More than a hundred unique tasks that deliver a solid pleasure. It is not so easy to solve them, it will take a lot of time. But you will have a lot of fun and you will be intrigued by the passage of an interesting story, where you will learn a lot of new things, and will also encounter all sorts of surprises and mysteries. Each new stage will be limited to snowballs, which will need to be used during the game passage. Engage in collecting transparent crystals in order to achieve incredible success in the course of the story. Special helpers as you progress through difficult levels will be various bonus items: colorful crystals and boosters that can help solve a difficult puzzle. However, to get them, you will have to work hard.

Gamer who managed to Frozen Free Fall: Icy Shot, will be a true witness to the enchanting fairy-tale effects that will bring a lot of fun. Win each level and watch. During the collection of combinations, players can expect an unimaginable number of miracles. The game will take place in the beautiful city of Arendelle, where heroic characters will pass through its picturesque streets, solving a variety of puzzles. Go to the huge castle, and then start to pass exciting tasks inside its walls. Such an amazing journey is unlikely to ever be forgotten. In a joint team with a gamer to help pass many levels will be famous animated characters.

Go through the entire fairy-tale city of Arundell

Olaf and Anna will Help you in passing, funny snowmen will also be connected to the case. Using ice magic, the player will be able to throw snowballs into crystals, destroying them. Occasionally, at various stages, there will be acceptable surprises that every heroic character dreams of. The main goal of the game player - as accurately as possible to aim and shoot a lot, but just hit the target. You control Elsa, who shoots a snow cannon. Collect bonuses and rewards and send them to your huge collection, and most importantly win. 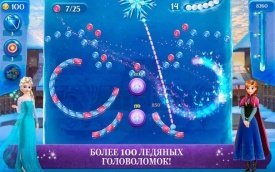 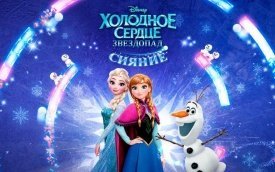 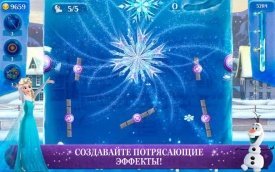