+57
We present you an interesting music arcade game for portable Android devices, designed for users who dreamed of performing on the big stage. The game application is performed in the best traditions of "Guitar Hero", which will help users to break the frantic ovation and feel like a popular superstar. During the game, gamers will see falling notes coming down from the top of the screen, they will need to collect using virtual keys. When the music ends, players will be able to see how many notes they managed to collect and continue the game at the latest level.

In total, Dubstep Hero contains thirty cool tracks in this unusual style, as well as songs by popular music artists AU5, Calvertron, and Barely Alive. When you start the game for the first time, all soundtracks except the original one will be blocked. To unlock them, users will have to collect at least sixty percent of the descending notes in past music tracks. One of the key features to note is the "Tracks" section, located in the main game menu. Here gamers will be able to find links to existing soundtracks and released their labels.

In a certain option, you can change the interface language if you want, including Russian and foreign. Dubstep Hero has a difficulty level setting, you can also configure the visual theme, the volume of the sound and music accompaniment, and the display orientation. The creators tried to make life extremely difficult for gamers. The creators not only used several lines of movement, for which you need an eye and an eye, but also invented various types of points. For example, during the appearance of "tailed" options, the down button of the display will need to be held for a very long time, and in other cases, a single click will be sufficient.

Drawing toys fashionable, but quite simple. Its main elements are considered to be light-bright points and lines. One of the interesting features you may notice a variety of special effects that accompany the pressing of certain buttons. Each successfully performed rhythm provides a great opportunity to get a noisy reward from the audience. The gameplay here is very complicated, so players will need a good preparation. Users will often have to use all sorts of different keyboard shortcuts in order to get the most out of it. 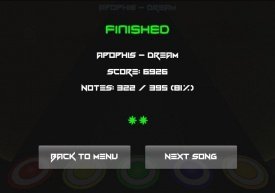 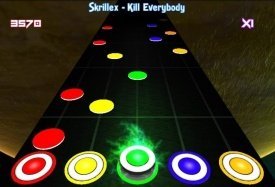 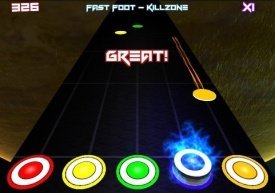 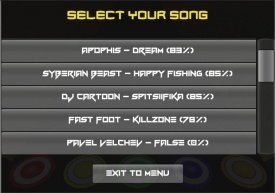 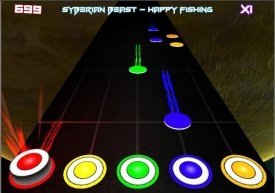