+2935
In this game, an original story is created, according to which the user will lead the hell. Under his control will be a hell of a shop, which will be interesting to spend time. The player will need to build their own special farm, which will be dominated only by demons.

The gamer will grow and develop at the expense of emerging people. It is necessary to exploit their power and rise up. You should also collect profits from their souls, becoming a huge Empire of hell. The gameplay will captivate the user for a long time, giving a lot of new experiences.

Here you can find a lot of torture chambers, where there are special tools. To better organize the process, you should put more boilers. You will also need whips to discipline unruly souls. Every day, new souls of different races will enter hell. And to start the game, you need to download Idle Heroes of Hell - Clicker & Simulator
.

The user will become the owner of the souls using their work. The player will be able to take part in competitions with other gamers. The game contains a lot of fun moments that will help you have a good time. In addition, existing monsters can be improved. 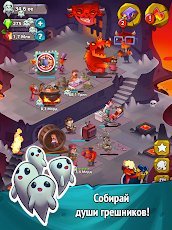 Mr.Kim - A half baked hero